Root Words are the building blocks of a word. Do you know what is common among the following words: homogeneous, homophobe, homogeny? The answer is: Homo Root Word.
The word root ‘homo’ comes from the Greek word homos, which means ‘Same’. For instance, the word homogeneous means of the same kind. Similarly, homophobe means someone who has a prejudice or hatred for a homosexual person. The word homogeny, made from the homo root word, means state of being all the same. So remember this root word homo as same and learn the different words based on the same root here: 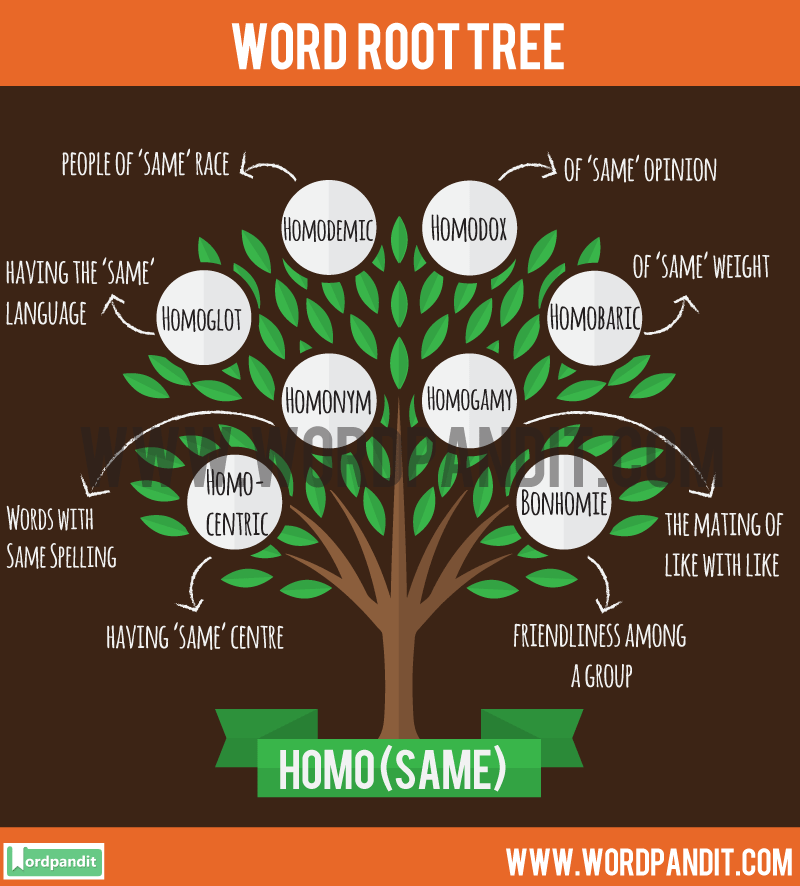 Words Based on the Homo Root Word

Here are some of the words based on Homo Root Word:
1. Homologous: Things that are similar in structure or function indicating of having a common origin
2. Homonym: Words that are pronounced or spelled the same way but have different meanings
3. Homogamy: The mating of like with like
4. Homosexual: Sexually attracted to people of the ‘same’ sex
5. Bonhomie: A feeling of friendliness among a group of people
6. Homophones: Two words having ‘same’ pronunciation but different meanings.
7. Homobaric: Of ‘same’ weight
8. Homoatomic: Considering ‘like/same’ atoms
9. Homocentric: Having ‘same’ centre
10. Homochromous: Being of just ‘one’ colour
11. Homodemic: People of ‘same’ race
12. Homodox: Of ‘same’ opinion
13. Homogen: A group that has a ‘same/common’ origin
14. Homoglot: Having the ‘same’ language
15. Homolateral: On or affecting the ‘same’ side of the body
16. Homomalous: Applied to leaves or branches that turn in the ‘same’ direction

We hope this Root Word Homo will help you remember and learn a lot of words. Also, whenever you come across a word with this Homo Root Word you should understand that it is related to being similar or same.