IBPS reasoning ability questions with answers will help you groom for the exam. Use the approach of “practice as you learn” to be prepared for the exam in the best possible way. This method will armour you with great concept building and good speed to score well in this section. With the help of IBPS reasoning ability questions with answers you can get to know the various kinds of questions that can be asked of you in the exams, analyse the best possible approach to solve the problems and develop the right thought process that goes into solving a question of logical reasoning.

Directions for the question set:
Seven bands were scheduled to perform during the weeklong music festival at XLRI. The festival began on a Monday evening and ended on Sunday evening. Each day only one band performed. Each band performed only once. The organizing committee had the task of scheduling the performances of the seven bands – Catlis, Axiom, Enima, Ballon, Fill, Dhinchak and Bodhiratna. The festival schedule followed the following conditions: the performance of Bodhiratna, the home band of XLRI, did not precede the performance of any other band. Among the visiting bands, three were Roz bands and the other three were Farzi bands. All three bands of the same genre were not allowed to perform consecutively, Ballon, which was a Roz band, refused to perform immediately before or after Fill. Mirza, who was a lead vocalist with a Roz band, refused to perform after Angelina. Angelina was the only female lead vocalist in the music fest. Bonny was with the band Enima. Angelina refused to perform after Thursday citing personal reasons. Ali, who was the lead vocalist of a Roz band, was not with the band Dhinchak, and did not perform on Saturday. Siddharth, the lead vocalist of the Roz band Catlis, could perform only on Monday. Rahul, the lead vocalist of one of the Farzi bands, was with Fill and performed on Wednesday. None of the bands performed in absence of their lead vocalist. 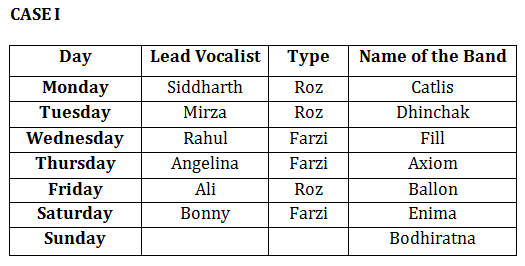 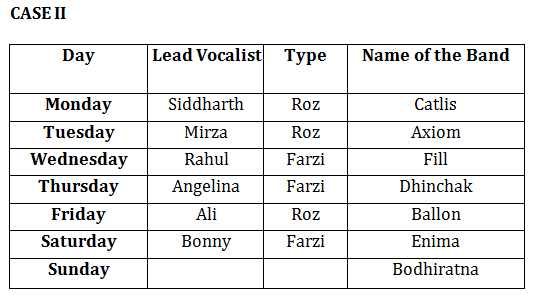 Answer 1: (E) Looking at the above table, E is right. The correct option is (E).

Answer 2: (C) Based on the table, Ballon performed on Friday and Mirza performed on Tuesday has to be true. The correct option is (C).

Answer 3: (D) Based on the table, the correct sequence is: Catlis, Axiom, Fill, Dhinchak, Ballon, Enima The correct option is (D).