Suppose you have to buy a car at Rs. 200000. You can pay the seller in two ways: Either you can pay the entire amount in one go i.e. you’ll pay Rs. 200000 and take the car.
But what if you don’t have enough money at the time of purchase?
The other option is that you pay some down-payment and give the remaining amount in the form of equal installments at regular intervals.

Note: In installment scheme the buyer pays more because in addition to installment a buyer has to pay an interest on it monthly or yearly.

What is Down payment?

It is the amount that is paid initially while buying the article. Rest is paid in form of installment and an interest on it. 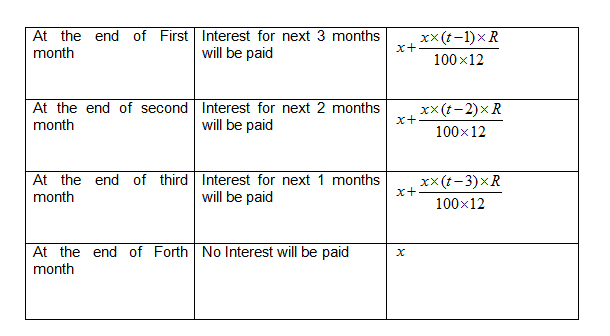 This amount will be equal to the principal borrowed and interest given on that for 4 months.

Example: A device is available for Rs 5000 cash or Rs 500 down payment followed by 4 equal installments. If the rate of interest charged is 25% per annum simple interest, calculate the monthly installment.

Now let us discuss the next type of questions which are often confused with previous type.

Example: What annual installment will discharge a debt of Rs 770 due in 5 years, the rate of interest being 5% per annum?

Solution:Installment paid at the end of 1st ,2nd ,3rd ,4th and 5thyear will be simple interest paid for 4,3,2,1,0years respectively .

Shortcut Formula
The annual payment discharged while paying a debt of Rs. A due in n years at the rate of interest r% per annum is

Type 3:
Example: A mobile worth Rs. 500 can be bought by paying a down payment of Rs.100 and 8 equal installments of Rs. 50 each. Calculate the rate of interest.

To calculate the installments paid with compound interest, we use the following formula:

Example: Three equal installments, each of Rs. 300, were paid at the end of the year on a sum borrowed at 20% compounded annually. Find the sum.
Solution:
Rate= 20%
Installment = Rs.300
Principal=?

Putting these values in the formula: