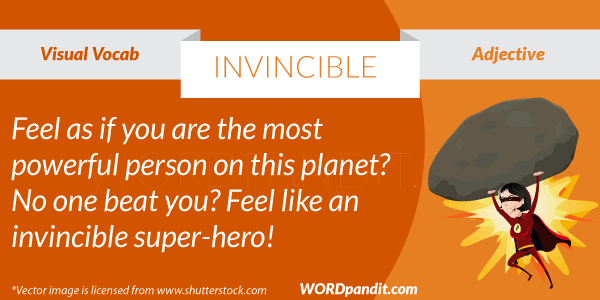 Everyone would want to be invincible, because it means you being incapable of defeat! As illustrated, superheroes and in Indian cinema, the hero is almost always invincible: whether it is Superman, Spiderman, batman, or plain old Salman Khan.

The dictionary defines invincible as follows:
1. Incapable of being defeated; unconquerable
2. Unable to be overcome; insuperable

Master tips for invincible:
Invincible is a very popular word used in pop culture, and if you’ve missed out on comics and cartoons, you can still remember its meaning by relating it to Leornada Da Vinci : the famous artist, philosopher and engineer. His mind is often said to be superhuman, and during his era he can safely labelled invincible.

Usage of invincible:
1. Her invincible spirit and determination landed her the job of her dreams.
2. The invincible army were no match for the infidels.