Roots are the building blocks of words. As there are many branches of a tree, similarly there can be many words formed by the same root. One of the most effective ways to improve your vocabulary is to learn roots, especially roots of commonly used words so that you can remember the meaning of the words. In this article, we will explore the root word: Mal

You must have heard words like Malice, Malignant or Malediction. One thing that is common among all of these words is that they all refer to something bad or evil.The prefix mal- is usually added to change the meaning to negative and refers to bad, unpleasant or unsuccessful things. It can be explained by the origin, where mal- comes from Latin root male, which means ‘badly’, and a mnemonic you can use to remember it is that males are bad, just kidding. We are not against the male species.

Let’s take the word malevolent as an example. It is an adjective that describes someone who does or wants to do harm or evil to others.

In other words:
‘Malevolent’ breaks down into:
Mal: Bad or evil
Volent: Will or choice
Mal +Volent: Ill-will or hatred; wishing evil to others

Example sentence:
After experiencing severe maladies during pregnancy, she gave birth to a malformed infant. 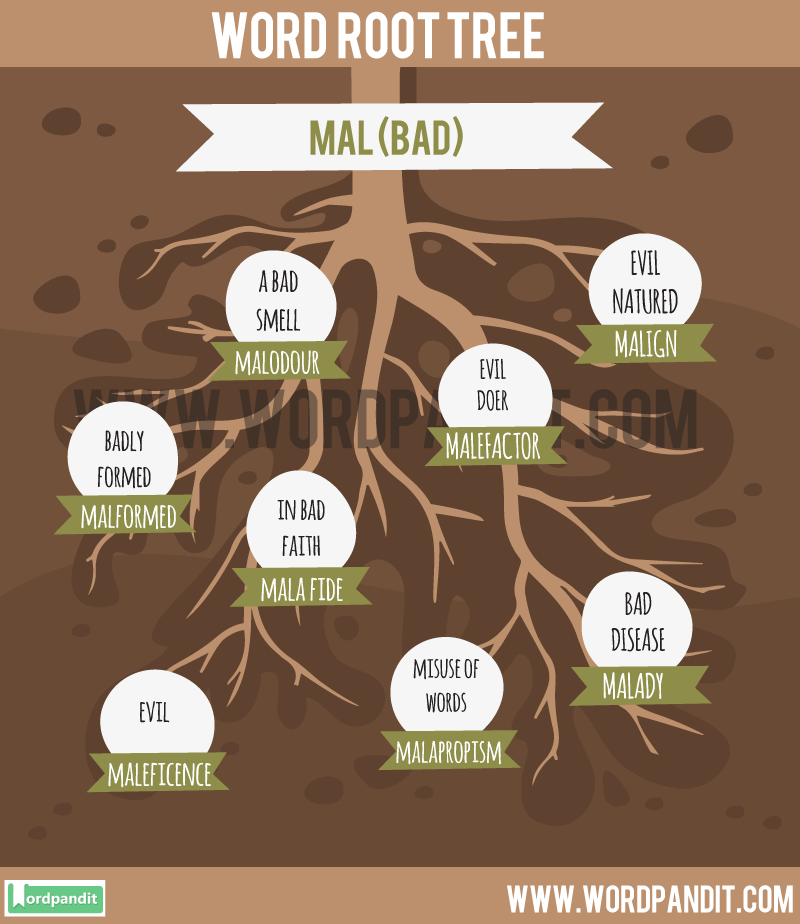 Words Based on the Mal Root Word

1. Mala fide: Doing something in bad faith, in an attempt to deceive someone
2. Malabsorption: Bad absorption of food
3. Maladjusted: A bad ability to adjust to a social environment
4. Malaise: A general state of feeling badly; sickness
5. Malign: Evil-natured
6. Malefactor: Evildoer
7. Malady: Bad disease
8. Malapropism: A bad use/misuse of words due to ignorance
9. Malaria: “bad air” or a disease carried by mosquitoes
10. Malcontent: One who is dissatisfied and wants to change a bad for him situation
11. Malediction: Curse words uttered to cause evil
12. Malefactor: One who committed a crime or did a bad thing
13. Maleficence: Evil
14. Malfeasance: Doing an evil thing/ commiting a crime (esp. officials)
15. Malformed: Badly formed (bodies)
16. Malice: Desire to inflict harm or evil on others
17. Maliferous: Doing a bad thing
18. Malignant: Evil-natured, bad for health
19. Malism: An ideology that the world is evil
20. Malodour: A bad smell