We are going to discuss about the Root Word Meta in this given article.The root word Meta is the building block of many commonly used words like metaphysics, metabolism, etc.  Let’s see, what does it mean?
The term metaphysics contains the root word meta- and refers to the branch of philosophy that probes and studies the nature of reality, including the relationship between mind and matter, substance and attribute, fact and value. It was interpreted to mean a subject that is beyond the realm of knowledge contained in physics.’Metaphysics’ is derived from the root ‘Meta’, which means ‘change, after, beyond, between’.

Example sentence:
Due to metachrosis chameleons are able to change their colour. 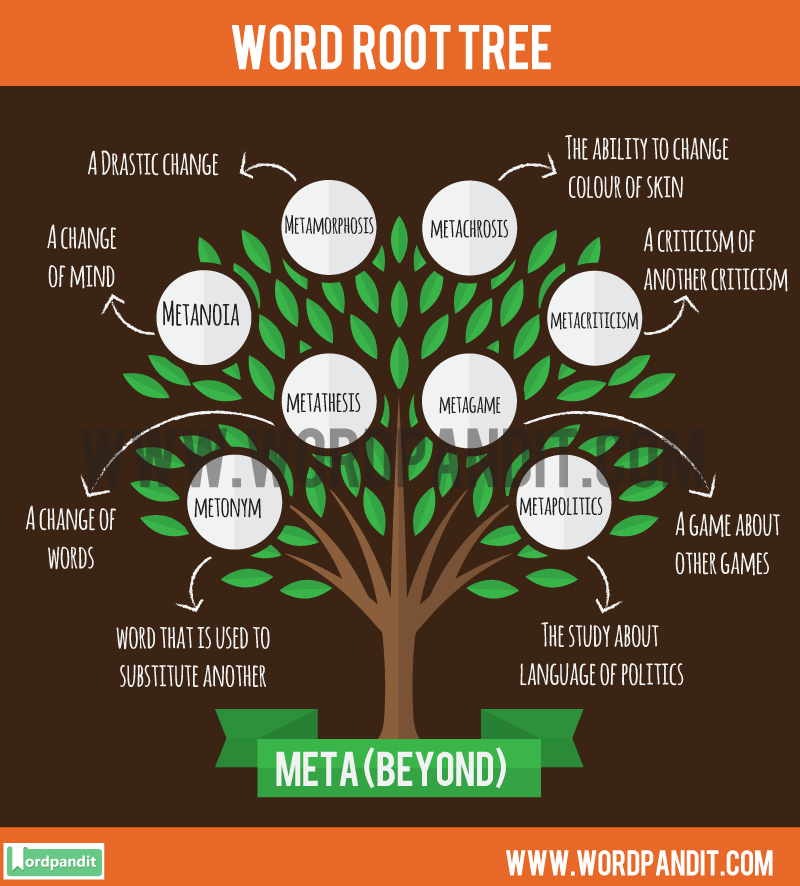 Words Based on the Meta Root Word

1. Metabolism: Chemical processes that occur within a living organism in order to maintain life
2. Metachrosis: The ability to change colour of skin (among animals)
3. Metacognition: Understanding of one’s own thoughts process
4. Metaconversation: A conversation after and about a conversation
5. Metacriticism: A criticism of another criticism
6. Metafiction: A genre in which the author goes beyond the conventions of novels and narrative techniques
7. Metafile: Stored information that can be passed between computers or systems
8. Metagame: A game about other games
9. Metagrammar: A grammar that explains all possible grammars
10. Metalinguistics: The study about the relationship between language and society
11.Metamorphosis: Change in a form of a thing or a person
12. Metanoia: A change of mind or lifestyle arising from a spiritual conversion
13. Metaplay: A play that has another play in it as a part of the plot
14. Metapolitics: The study about language of politics
15. Metastasis: A negative change in the growth of malignant growths on the body (cancer)
16. Metatarsus: Bones in the foot, which are between the ankle and toes
17. Metathesis: A change of words or sounds in a word
18. Metonym: A word or expression that is used to substitute another

Hope you will remember all of these words that use the root word Meta and refer to a change beyond. It is advisable that you keep refreshing the different word roots in order to enhance your vocabulary and retain a large number of words.