What does the Root Word Migr mean?
The Migr root word comes from Latin migrat- ‘moved, shifted’ and means to move – relating to movements from one country to another. Let’s look at the word ‘immigrant’. You use the word ‘immigrant’ to call a person, who has come to live in a country from a different place. Do not confuse it with the word ‘emigrate’ that refers to leave your country in order to move to another one.
Example sentence:
The recent discontent was caused by an influx of illegal immigrants. 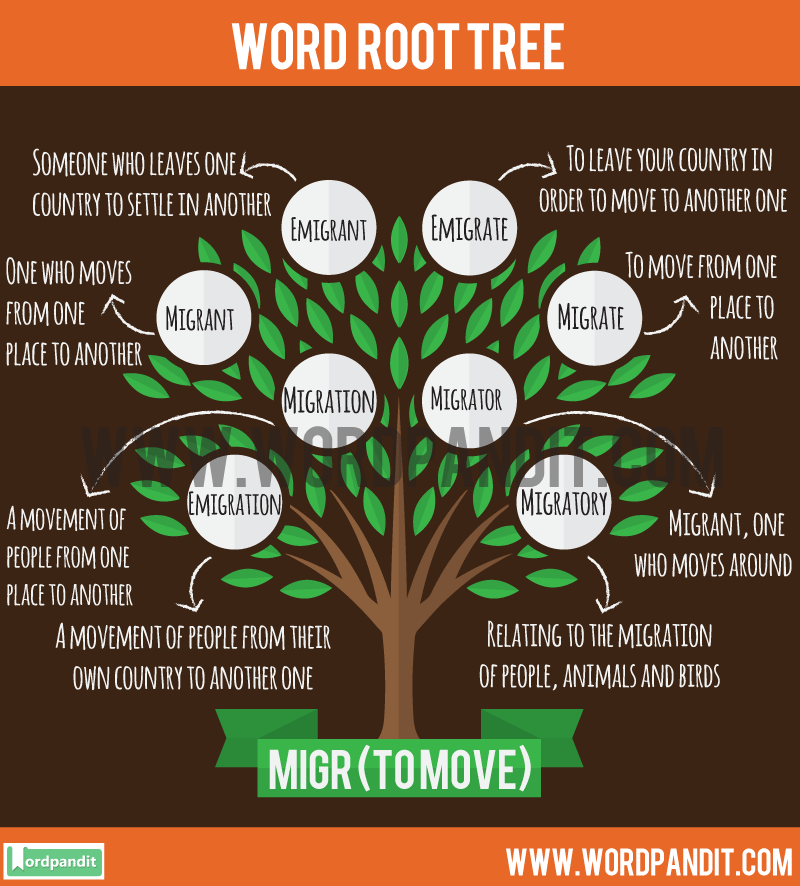 Words Based on the Migr Root Word

Other words derived from the same root are:

1. Commigrate: To migrate in a group
2. Emigrant: Someone who leaves one country to settle in another
3. Emigrate: To leave your country in order to move to another one
4. Emigration: A movement of people from their own country to another one
5. Emigrative: Being willing to emigrate
6. Émigré: One who leaves his own country to move to another one, often due to political reasons
7. Emigree: One who has to emigrate due to some political reasons
8. Immigrant: One who has moved to live in a country
9. Immigrate: A movement of people coming to live in a country
10. Migrant: One who moves from one place to another
11. Migrate: To move from one place to another
12. Migration: A movement of people from one place to another, often according to the seasons
13. Migrator: Migrant, one who moves around
14. Migratory: Relating to the migration of people, animals and birds
15. Nonimmigrant: One who is not a immigrant
16. Transmigrate: To be re-born in a different body
17. Transmigrationism: An idea that a soul moves to a different body after death

This article aims at making you learn the words based on Migr Root Word. Remember, the best part about learning through roots is that you can learn so many words at the same time and also remember them together.