It is a famous saying: We are but mere mortals. The Word Root Mort comes from Latin mors, mort means ‘death’. Therefore, this saying means that we are not gods, but humans who will definitely die. Interestingly, the word mort is an archaic word, and it was used to describe the horn’s sound when the quarry was killed.
Let’s look at the more contemporary word immortal that relates to things that cannot die and will last forever.
Example sentence:
Every time he thought about the mortgage, he wished he had been moribund. 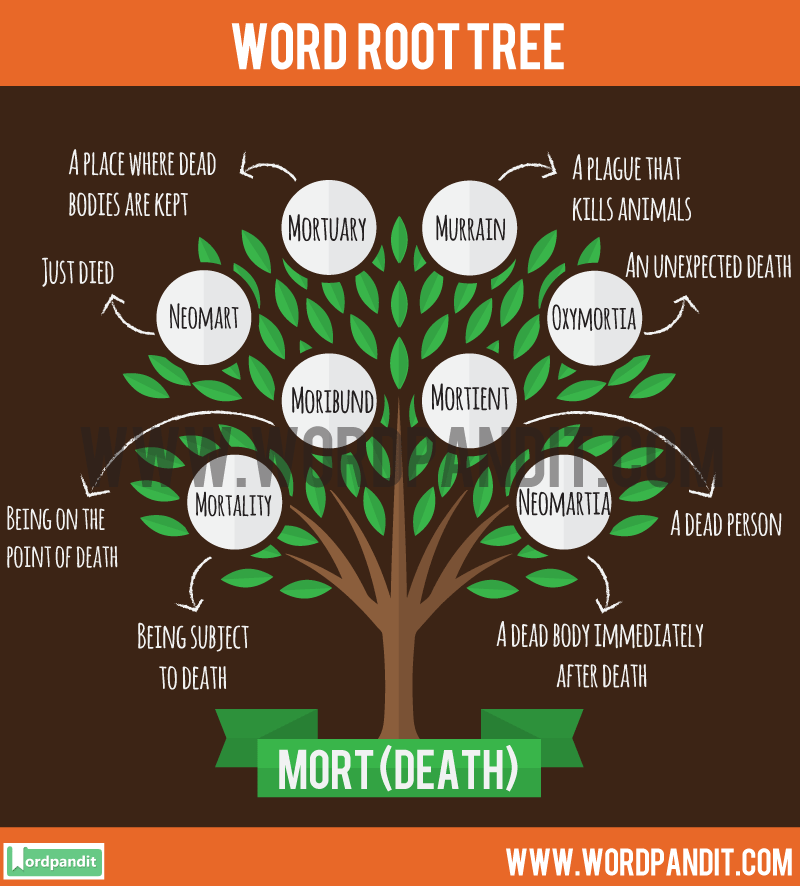 Words Based on the Mort Root Word

Other words derived from the Root Word Mort are:
1. Amort: Lifeless, in the course of dying
2. Amortization: Paying out the debt in small amounts
3. Moribund: Being on the point of death
4. Mortality: Being subject to death
5. Mortgage: A loan of money given by a bank to buy a house that should be paid during a particular number of years
6. Mortician: One whose business is to manage funerals, undertaker
7. Mortient: A dead person
8. Mortiferous: Producing death
9. Mortific: Causing death
10. Mortify: To decay and to die/Practice self-denial of one’s body and appetites
11. Mortinatality: Death before being born
12. Mortinatus: A child who was born dead
13. Mortuary: A place where dead bodies are kept until the burial or cremation
14. Murrain: A plague that kills animals
15. Neomart: Just died
16. Neomartia: A dead body immediately after death
17. Oxymortia: An unexpected death
18. Premortal: A state before death
19. Premortient: One who is dying
20. Self-mortification: Limiting oneself in food or desires as an act of washing oneself morally
Hope you are able to learn some words related to Mort Root Word from this article. Remember, it is all about increasing your vocabulary and word roots is a wonderful method of learning multiple words at the same time.