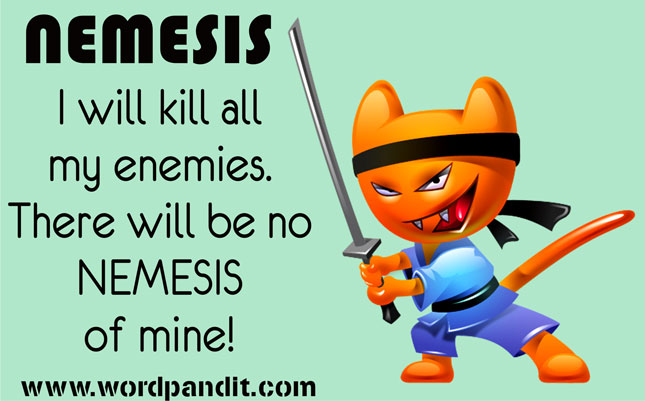 Origin of the word Nemesis:

In Greek, ‘nemesis’ means ‘to give what is due’. In Greek Mythology, Nemesis was the spirit and Goddess of divine retribution against those who succumb to arrogance before the Gods.

Quoting from Wikipedia: The word Nemesis originally meant the distributor of fortune, neither good nor bad, simply in due proportion to each according to what was deserved; then, nemesis came to suggest the resentment caused by any disturbance of this right proportion, the sense of justice which could not allow it to pass unpunished. In the Greek tragedies Nemesis appears chiefly as the avenger of crime and the punisher of hubris.

In modern English, “nemesis” has become a term for an enemy or archenemy, especially one that is similar to oneself but opposite in some critical way. For example, the fictional Professor Moriarty is a brilliant, unconventional, manipulative criminal, who is frequently described as the nemesis of Sherlock Holmes, a brilliant, unconventional, and manipulative detective.’

The dictionary definitions for Nemesis are as follows:

Just image the picture of worst enemy who always defeats you (person or thing): He is your Nemesis.

The following is an extract from The Washington Post used for educational purposes:

As we see from above, the word in the given context means ‘one’s enemy’.