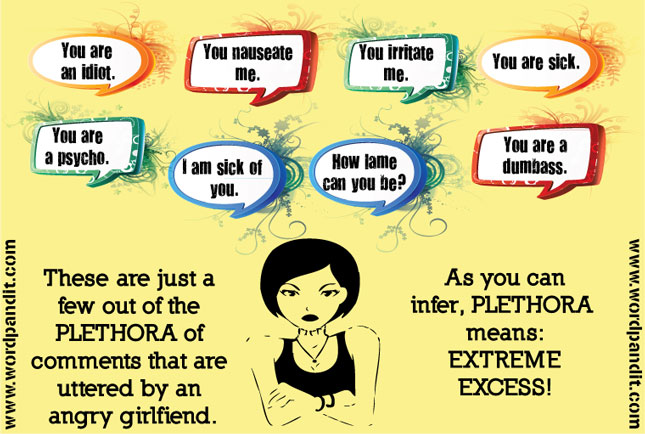 Origin of the term Plethora:

The word plethora came from Greek root ‘plēthṓra’, meaning fullness. And if we trace back the root genealogy (The study or investigation of ancestry) a little further, we come to realize that the Greek word initially referred to a condition where there was ‘an excess of blood or other fluids in the body’. Over a period of time, as it has happened with numerous other words, plethora was adopted into the English language retaining its figurative sense: ‘an abundant excess’.

The dictionary definitions for plethora are as follows:
1. A superabundance; an excess. (noun)
2. An excess of blood in the circulatory system or in one organ or area. (noun)

Masters Tip to remember Plethora:
A plethora of abuses are hurled by an angry lover, as in the word-poster above.

Usage Examples for Plethora:
1. “The plethora of special effects — some dazzling, some clumsy — make “Harry Potter” at times resemble a generic Hollywood horror movie. That three-headed dog that stands guard over a treasure was better left to the imagination. . .”- David Ansen
2. We’re going to have a plethora of questions for the FBI and for Justice. And I’m not sure they are going to have any good answers to those questions. – Tim Roemer