There is no stop to learning, is there? And what I learned today comes from a reading a book of essays by George Orwell. The book, titled ‘Why I Write’, is featured in the Penguin Great Ideas Series and I believe is a must read for anyone who wishes to write. That besides the point, my learning for today comes from the following lines: “As for the need to describe things, I knew all about it already. So it is clear what kind of books I wanted to write, in so far as I could be said to want to write books at that time. I wanted to write enormous naturalistic novels with unhappy endings, full of detailed descriptions and arresting similes, and also full of purple passages in which words were used partly for the sake of their own sound. And in fact my first completed novel, Burmese Days, which I wrote when I was thirty but projected much earlier, is rather that kind of book.”

I had heard the phrase ‘purple patch’ very often but never had seen this word being used for words previously. A simple lookup in any online dictionary would shed the much needed light in this case:

Purple (Of writing): excessively elaborate or full of imagery. 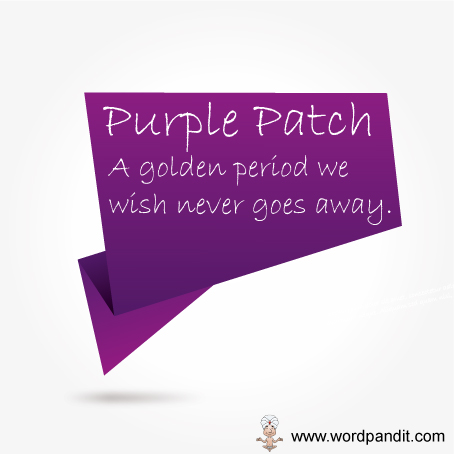 ‘Purple passage’ or ‘purple prose’ are in fact used to define the ornate and elaborate side of writing, and all we thought about purple it was the poor cousin of violet and red, born out of the wedlock between these two colors.

Another interesting usage of purple comes into the picture when we say ‘born to the purple’. In this case, we mean by the expression that one held high rank or was of an imperial background. Now this is a surprise, isn’t it?

Well, we have had our fair share of surprises for today. Now it’s time for some conventional humdrum, time to study what we already know: the meaning and usage of the phrase purple patch.

Purple patch, when used in slang, refers to a golden period of success, a period we all crave for but seldom have. Sportsmen, when in the middle of a streak where they just cannot seem to lose, are said to enjoying a purple patch. Same is the case with gamblers.