To perform well in reasoning for indian railways exam you need to start well in advance with the preparation. To begin with, get to know the syllabus and develop a proper schedule to target every topic in it. Here is the list of the extremely important concepts that are asked in reasoning for indian railways exam: Analogy, classification, series, mathematical operations, arithmetic reasoning, number, ranking and sequence test, syllogisms, sitting arrangements, alphabet test, logical sequence of words, inserting missing character, five-figure series, dot situation, mirror image, completion of incomplete pattern and paper cutting/folding. To make your logical skills stronger in reasoning for indian railways, it is advised to solve these sets consistently and gauge your performance through start and end.

Directions for the question set:
Read the following information carefully and answer the given questions:

A,B,C,D,E,F,G and H are eight persons of a family. There are three married couples in the family. All the persons are from three generations. No female is unmarried in the family.

A and B are children of D while G and H are children of E and C respectively. F is the wife of D. C is one of the females and she is not the wife of A (A is a male) . Among them there are three Doctors, two Teachers, two Journalists and one astronaut. Each person has only one occupation.

Question 1: The only male who is sitting opposite to a female is a/an?
(a) Teacher
(b) Doctor
(c) Journalist
(d) Astronaut

Question 3: The only person who is sitting between C and B is a/an?
(a) Teacher
(b) Doctor
(c) Journalist
(d) Astronaut

Question 4: Which of the following statement is true regarding the person who is between G’s father and H’s grandmother?
(a) She is sitting opposite a Doctor.
(b) She is a Teacher.
(c) He is sitting one place away from a Teacher.
(d) He is the son of a Journalist.

Question 5: Who among the following is/are definitely not a Doctor?
(a) Son of D.
(b) Mother of G.
(c) One of the grandsons of F who is B’s son.
(d) Data Inadequate. 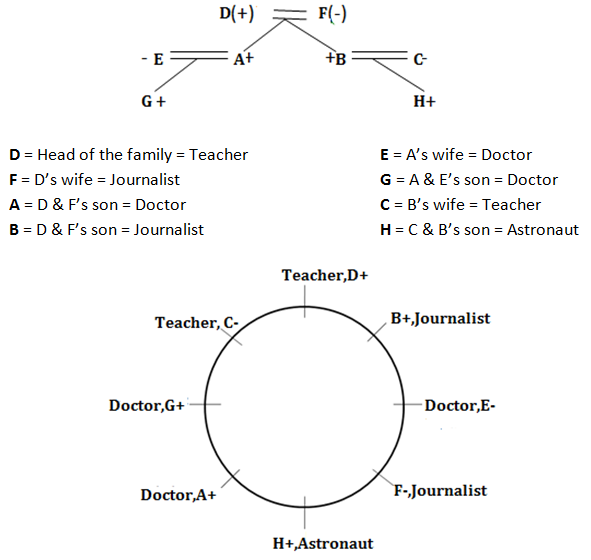 The only male sitting opposite a female is a Doctor. Some crucial conclusions which can be made from the hints given are- Since D & G are not to be opposite to each other, hence G has to be between C & A so as not to be facing D; Now as H cannot be between B & C, therefore H should be between A & F. Also since from the given clues it can be concluded that C, D, H, B, F can’t be doctors, hence the remaining three need to be doctor. Now since B & E are not teachers, hence C has to be a teacher since there are total two doctors.

Answer 1: (b) The only male sitting opposite a female is a doctor. The correct option is (b) .

Answer 2: (c) The two females who are sitting adjacent to each other are E and F. The correct option is (c) .

Answer 3: (a) The only person who is sitting between C & B is a Teacher. The correct option is (a) .