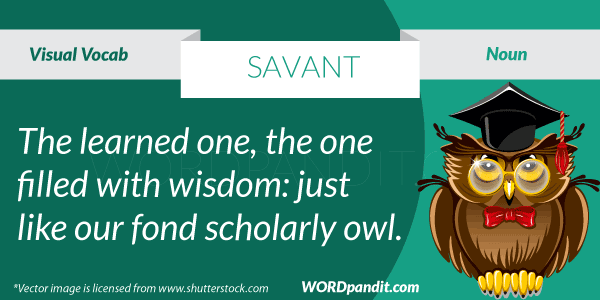 Savants are men of wisdom and knowledge. By men, we mean the whole human race and intend no gender specific distinction. These are people with an amazing pool of knowledge, men one can turn to at any given time for one’s answers. Pretty useful people, aren’t they?

Interesting tit-bit from Wikipedia:
Savant syndrome (pronounced /səˈvɑːnt/[1]), sometimes referred to as savantism, is a rare condition in which people with developmental disorders have one or more areas of expertise, ability, or brilliance that are in contrast with the individual’s overall limitations. Although not a recognized medical diagnosis, researcher Darold Treffert says the condition may be either genetic or acquired.

Usage examples for Savant:
1. “An idiot savant is a person with autism that has extraordinary skills in certain domains in spite of cognitive deficiencies in most others.”- Hall of Flame
2. One often sees savants like him in the library, guzzling down one book after the other.