A good score in the Reasoning section demands good amount of preparation and practice. SBI clerk reasoning questions cover all the essential must-do concepts in the syllabus and give you right guidance through the medium of clear and consistent solutions. Solution is something that you should give a lot of importance to while selecting questions for practice. SBI clerk reasoning questions not only are a collection of strong concept oriented problem sets but also are a powerhouse of detailed solutions that have step wise problem analysis to help candidates establish the correct line of thinking and provide the best possible approach to solve a particular type of problem.

Directions for the question set:
Answer the questions based on the following information.
Sixteen teams have been invited to participate in the ABC Gold Cup cricket tournament. The tournament was conducted in two stages. In the first stage, the teams are divided into two groups. Each group consists of eight teams, with each team playing every other team in its group exactly once. At the end of the first stage, the top four teams from each group advance to the second stage while the rest are eliminated. The second stage comprised several rounds. A round involves one match for each team. The winner of a match in a round advances to the next round, while the loser is eliminated. The team that remains undefeated in the second stage is declared the winner and claims the Gold Cup.
The tournament rules are such that each match results in a winner and a loser with no possibility of a tie. In the first stage, a team earns one point for each win and no points for a loss. At the end of the first stage, teams in each group are ranked on the basis of total points to determine the qualifiers advancing to the next stage. Ties are resolved by a series of complex tie-breaking rules so that exactly four teams from each group advance to the next stage.

Common solution for the Set: Since there are 8 teams in a group and each team has to play with every other team in the group exactly once, therefore the number of matches played are [8C2] i.e. 28 matches. And every match has a winner therefore there are 28 wins and similarly 28 losses. To advance to the next stage only 4 teams are selected from a group. Suppose a team wins 5 matches and similarly there may be a case where 5 teams can win 5 matches each making it 25 wins and since only 4 teams could be selected, a team winning 5 matches cannot be sure of its advancement. However, if a team wins 6 matches it is not possible for more than 4 teams to win 6 matches (as max wins can be 28). Hence it would be assured of its advancement. 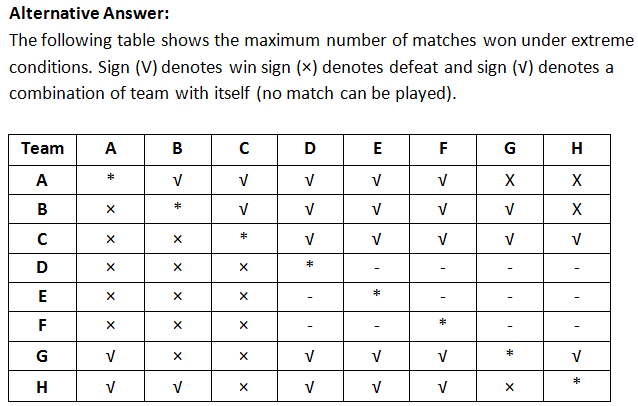 Answers 1: (b) From the table, we find that each of A, B, C, G and H can win 5 matches hence it cannot be decided that which team will qualify for the final. Therefore, the minimum number of wins that can assume a place in the second stage is 6. The correct option is (b).

Answers 2: (c) There will be eight teams in each group. Each team in a group will play with every other team. Hence, total number of matches will be 7×8/2 = 28 in one group. Hence, in both the groups, there -will be 56 matches. This is for the first stage game. Again, there are 8 teams in knockout rounds from which one winner emerges or 7 losers are identified. Hence, 7 more matches will be played. So, total number of matches played = (56 + 7) = 63. The correct option is (c).

Option (a): Therefore from the above simplification, it can be said that in the second stage among all the 8 teams, the number of teams with: no win = 4 1 win = 2 2 wins = 1 3 wins = 1 Hence, option (a) is incorrect. Option (b): It is not necessary that winner has more number of wins than any other team. It might be possible that loser won 7 matches in first round but couldn’t win round 2. So ,option (b) is incorrect. Option (d): Cannot be said as both groups are different. On the basis of the information, option (c) is the only true statement. There are two groups. Let’s say in the first group, A won 7 matches, B won 6 matches and C won 5 matches and D won 4 matches. So these 4 teams are eligible for stage 2. Similarly, In other group, let’s say I won 6 matches, J won 6 matches, K won 6 matches, L won 5 matches

The correct option is (c).