In the previous articles, we learnt about an irrational number. But what is a Surd?

In this article we will get to know more about Surds and its applications.

Alternatively, when we can’t simplify a number to remove the root (square root, cube root, etc.), then it called a surd.

, etc. cannot be simplified to remove the root. Hence, they are surds.

Note: Not all roots are surds.

For example: can be simplified to remove root. Therefore, it is not a surd. (As

If x is a positive rational number, then

root of x will be

. This is called a surd, where n is order of surd and x is positive rational number.

It can be noted that the operations applied in surds are basically opposite of that applied in exponents.

Consider a right angle triangle with base and perpendicular of 1 unit.

Rationalization is done in order to remove surd (or say, Root) from denominator to make calculation easier. Let us understand this with the help of examples.

As we want to rationalize

, we have to make the denominator a rational number. Hence, we will multiply and divide the fraction by

Let us take another example.

To understand surds more, take a look at the laws of surds given in the table below: 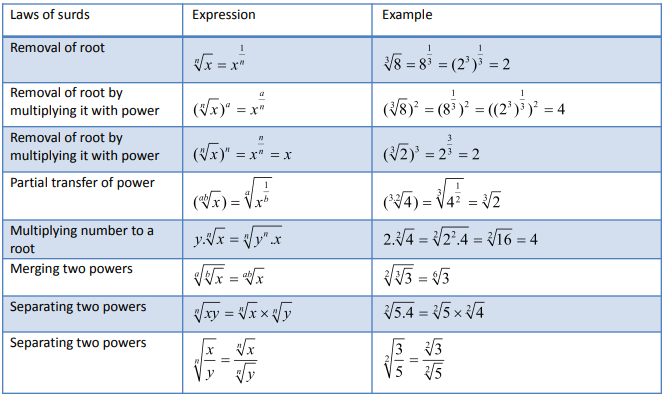 It gets tricky to compare surds as it there isn’t a precise value and it needs judgment to  make a quick and easy comparison.

You could refer the below cases to get quick with comparisons:

Example 1:  Which is greater ?

Example 2: Which is greater ?

Step 1: First, we make the denominator of the power same, which is equal to the LCM of the denominators of powers, by multiplying and dividing by a suitable number.

Step 2: Then use the concept used in case 1.

Example 1:  Which is greater

So, to convert power into same order, we make the denominators of powers equal to 12.