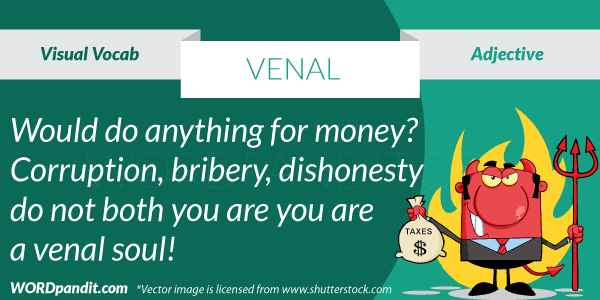 Time to be corrupt.
Time to lay aside all morals.
Time to earn as much as I can without any regards for honesty, ethics and so on.
Time to be venal.
Venal acts are common, especially if you live in India.
The picture above, depicting the custom officials , is one such example of a venal act in an almost endless list.

The dictionary definitions for Venal are as follows:
1. a. Open to bribery; mercenary: a venal police officer.
b. Capable of betraying honor, duty, or scruples for a price; corruptible.
2. Marked by corrupt dealings, especially bribery.
3. Obtainable for a price.

Usage examples of Venal:
1. The city administration is a venal one, seeped in corruption from top to bottom.
2. His own good heart pleaded her cause; not as a cold venal advocate, but as one interested in the event, and which must itself deeply share in all the agonies its owner brought on another.-The History of Tom Jones, a Foundling by Fielding, Henry